Burning the Tables in Las Vegas

This is the long-awaited sequel to the author's best selling (out of print) classic, Turning the Tables on Las Vegas. With a quarter century's worth of experiences in high-stakes gambling, Andersen here forges a blueprint for success in blackjack, poker and other games of life. He addresses virtually every aspect of blackjack advantage play: game selection, longevity, tipping, employee relations, guises, disguises, false identification, credit, comps, risk, heat, dress, demeanor and even diet. Peppered with anecdotes and stories, the book takes you on a vicarious journey into the rarefied realm of the blackjack pro and shows you what it takes to be one.
Get it at Amazon!
Read a review of Burning the Tables in Las Vegas
Free Online Blackjack School!

LuckyAce casino offers an excellent online tutorial for learning blackjack. This interactive instruction introduces beginners to the table, rules, cards and chips. There are also practice lessons, an explanation of house rules and a glossary. A particularly useful feature is the basic strategy card which you can consult while you play. If you're learning blackjack basic strategy, check out this blackjack school!
Play Now at luckyacecasino.com! 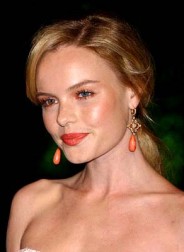 Kate Bosworth is slated to co-star in the upcoming blackjack movie, '21."  movie will tell the story made famous by the non-fiction best-seller, Bringing Down the House - the story of a group of young MIT grads who are taught a system to beat the casinos through a method of counting the cards in a Blackjack deck. The team rakes in millions of dollars in the exciting adventure, before internal disputes and bickering result in the operation crashing down around them.

"Kate Bosworth is set to play an unsuspecting geek who joins the team. The film was scheduled to begin shooting in Las Vegas and Boston, but Kate Bosworth has been sighted in Las Vegas with Kevin Spacey already.

"The film boasts a star-studded cast. Kevin Spacey is playing the MIT lecturer who teaches and mentors the young blackjack players, whilst Laurence Fishburne will play the dedicated and ruthless security contractor who is hired by the casinos to bring the team down…."

"…A relatively unknown actor, Jim Sturgess, will play the star of the movie. He will play 20-year-old MIT grad Kevin Lewis, who was invited to join the blackjack team in 1993. The team are able to get an edge over the casinos through the use of a mathematical system for beating blackjack, called card-counting. Card counting is legal, but casinos do not take kindly to it, and will ask card-counters to leave their premises. If the card-counters return, casinos may employ brutal tactics, as Kevin and his MIT friends found out.

"Lisa Lapira, Josh Gad and Masi Oka (Heroes) have also joined the cast of the film. Kevin Spacey is the producer.