Club USA Casino Blackjack is the best bet for practicing blackjack basic strategy without stress and distractions. The game comes in both free play and real money modes and you can play up to three hands on your own table. The rules are favorable and with a house edge of only 0.71%, better than many casinos. The table minimum is $1 per hand and the maximum is $500.
Play Now at Club USA Casino!
LuckyAce Casino

MANILA, Philippines -- 25-year-old Neil Arce sent the local crowd wild with delight by taking down the 2009 Asian Poker Tour Philippines at the Dusit Thani Hotel in Manila. Arce conquered a field of 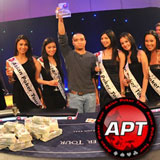 Neil Arce, winner of the 2009 Asian Poker Tour Philippines  262 runners representing over 40 countries to scoop the first prize of US$185,000. The runner-up was Steve 'joonhee' Yea from South Korea who also finished second at the 2008 Asian Poker Tour Macau in August 2008. Leading Tournament Director Matt Savage oversaw the action in the $2500 + $200 Main Event which had a total prize pool of US$635,500 with 27 places being paid.

"This is just great," said Arce, who is a well known figure on the Filipino poker circuit through running the Metro Card Club in Manila. "I always felt it would come down to me and Steve. For me the key to winning the tournament was position. I was so lucky that Steve was sat on my right – if he was on my left it would have been a completely different final table. I played with Steve all day yesterday when he was on a charge and kept out of his way. I knew that to get anywhere at the final table I had to keep applying pressure and my game plan worked perfectly."

Arce had been chip leader after Day 1A and had even guaranteed Asian Poker Tour CEO Chris Parker before the event got underway that he would emerge victorious in the tournament. He was third in chips at the final table and faced some formidable opponents including the impressive Yea and internationally respected professionals Liz Lieu and Asian Poker Tour Macau 2008 finalist Kasey Castle. The key hand came just after the talkative Arce had taken the chip lead from Yea. He showed willingness over a series of hands to up the pre -flop aggression. On the final hand, he made what had become a standard open for him of 100,000. Steve Yea re-raised to 300,000. Arce moved all in and Yea called in a shot. Arce held Ks Qs with Yea Ad Kh leaving Arce as 3 -1 underdog. The flop came 4s 6c 7h and Yea was two cards away from a massive double up. Then the turn came the Qh and the partisan crowd exploded. The river came 6h which was of no use to Yea and the 2009 Asian Poker Tour Philippines had itself a very popular champion! After two consecutive Asian Poker Tour runner-up spots and a dominating performance over the last few days Yea could only say, "next time I will do it," as he was commiserated by his tight knit group of supporters. Live reporting, prize payouts and hand specific details of the event can be found at www.asianpt.com and www.pokernews.com/live-reporting.

First out on the nine seat final table was Kim Tae Hyung from South Korea, followed by Finland's Vesa Leikos. Glamorous US pro Liz Lieu went seventh, followed by fellow American Ron Kluber and Japan's Susumu Toge. Cicurel Didiwe from the Seychelles finished fourth and US pro Kasey Castle in third. When it got heads-up Yea held the chip lead with 1,572,000 to Arce's 1,048,000. Notable cashes in the event include 12thplace for Nam Le and 13th place for his fellow member of The Poker Pack Steve Sung. Australia's Michael Pedley finished 10th and Matchroom Sport Director Eddie Hearn cashed in 16th.

Chris Parker CEO of the Asian Poker Tour said: "We would like to congratulate Neil on his fantastic win and thank all the players for making the 2009 Asian Poker Philippines such a successful event. We'd also like to thank all our partners for making this all happen, including the regulator PAGCOR."

"There were some tired eyes after the FHM/DafaPoker party but the atmosphere around the final table was buzzing. Neil's win is fantastic for poker in the Philippines – we hope that it strengthens the appeal of the game even further."

The Asian Poker Tour Philippines is drawing to a close and has been running since the 27th January. Amongst the side event winners are Henrik Eklund of Sweden who took down the PKR Headhunter tournament and Francis Uy of Manila who emerged victorious in the Ray Ban Invitational. Tommy Le followed his recent impressive Aussie Millions

Quinn Do, a member of the Poker Pack was on the final table of the DafaPoker Pot-Limit Omaha Hi tournament and gave 50% of his winnings to charity. A special Filipino Celebrity Charity Event also took place and was won by 'The Playgirls' who won 100,000 pesos for charity. Over 200,000 pesos in total went to various local charities. The FHM/DafaPoker Player's Party took place on the Saturday night and the famous Asian Poker Tour hospitality resulted in a massive poolside party hosted by FHM cover models that went on well into the night. Down in the poker room there was a 13 card tournament.

Coverage of this year's Main Event will be televised and distributed internationally later in the year.