Roxy Palace has some of the loosest slots on the web. Their selection is huge and with less overhead, employee costs and taxes than your typical brick and mortar casino, they can afford to give back a bigger percentages of bets back to the customer. If you're looking for loose slots, play online!
Play Now at Roxy Palace!
Free Slot Tournaments Going on Now at Roxy Palace! 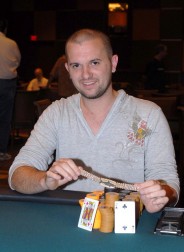 This series, which officially started June 6, featured daily tournaments at noon in The Grand, the property’s luxurious events center, and held its Grand Finale Tournament July 4 and 5.

“We had a fantastic ending to another exciting Grand Poker Series,” said John Colville, director of Golden Nugget poker. “We played a lot of poker, had a lot of fun and gave away a lot of money. It was a huge success.”

The series also hosted the Suzie and Howard Lederer Celebrity Charity Poker Tournament July 1, which raised $179,050 for The Boys and Girls Club through the tournament and donations. First place went to Steve Bartlett, who won an unprecedented opportunity to star on NBC’s hit poker program Poker After Dark. The $20,000 seat was donated by Full Tilt Poker.net. No poker tournament has ever awarded a seat on a nationally televised poker program with the chance to win $120,000 and become poker’s next television star. Additionally, the Grand Poker Series also helped raise $12,000 for the Poker Gives Charity during a tournament hosted by Mike Sexton June 4, kicking off the Grand Poker Series events.

This year’s series also held two bracelet events, the Golden Nugget Queen Ladies Event and the Grand Finale Tournament. The Queen Ladies Event had more than 230 players vying for a piece of the $45,000 prize pool, with Ruth Hall winning the converted bracelet and taking the home title of this year’s Golden Nugget Poker Queen. The Grand Finale event, the last major event of the series, welcomed the largest prize pool at more than $100,000, with Randy Propson beating out more than 100 other players to claim the $35,000 first place prize and Golden Nugget Poker Shark championship bracelet.

This year, the Grand Poker Series and the Golden Nugget partnered with organizations like the Ladies in Poker Hall of Fame, LIPS Tour, Poker Gives Foundation, Ladbrokes of the UK, Rounders Radio, NBC, Full Tilt, and Poker PROductions to bring a vast array of events and tournaments to the series, increasing prize pools, charitable donations and celebrity participation.

“We will continue to tailor the Grand Poker Series to be a premier players’ tournament series,” said Colville. “We’re already looking forward to 2010.”

The complete list of all daily tournament winners can be found below. For more information on Golden Nugget Poker, visit www.goldennugget.com.