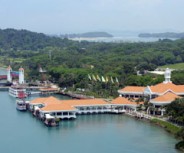 "Tobin Prior, president of Kerzner's international division, said that with 24.2 million gallons of aquatic attractions at the proposed entertainment complex on the resort island of Sentosa, it would be bigger than SeaWorld Adventure Parks in Florida, which is currently the largest water-based theme park with 19 million gallons.

"…The aquarium will have a mixture of live marine animals and robotic aquatic creatures, which can be seen from underwater viewing tunnels.

"Kerzner and its 40-percent partner CapitaLand have hired architect Frank Gehry, whose design for the resort consists of two glass-and-steel structures that undulate like billowing sails.