Poker Stars has reopened for most of the world, but not yet in the United States. It is endorsed by professionals like Daniel Negreanu and Chris Moneymaker. The site offers Texas Hold'em, Omaha, Omaha 8/b, 7 Card Stud, 7 Card Stud 8/b, Crazy Pineapple, Crazy Pineapple 8/b, Triple Draw, Royal Hold'em. Table limits range from penny games up to $300-600. The competition leans to the more challenging end of the spectrum.
Play Now at PokerStars!
Great Video Poker at Club USA Casino 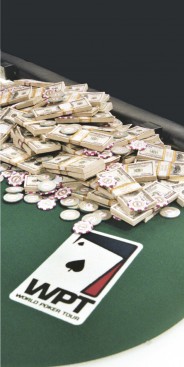 with the Season VII World Poker Tour (WPT) World Championship. To compete, players may either pay the $25,000 entry fee or earn a seat by participating in one of the seven super-satellite tournaments held throughout the first three weeks.

The WPT World Championship begins Saturday, April 18 and Sunday, April 19 at noon with two separate flights. The event continues Monday, April 20 with all competitors who have retained chips from their original allocation and concludes with the televised final table Saturday, April 25.

Jack McClelland, director of poker tournament operations at Bellagio, is hopeful for another strong championship and said, “Our no limit tournaments and satellite events always have been well-attended and we hope to continue the trend this year. We anticipate more than 500 participants in this year’s championship including a heavy international contingent from countries including England, France, Denmark, Germany and Turkey, among others.”

California resident David Chiu captured the 2008 WPT World Championship at Bellagio in what was one of the largest comebacks in poker tournament history. He earned his first WPT title and the first place prize of $3,389,140 after two-and-a-half hours of heads up play against three-time WPT Champion Gus Hansen. Hansen, who finished second among the 545-player field, earned $1,714,800 for his second-place outing. The four players Hansen knocked out at the final table included former NFL Kicker John Roveto, well-known professional poker player Cory Carroll, Tommy Le (brother of WPT Champion Nam Le) and amateur Jeff King.