Poker's elder statesman teaches the novice what to expect in the world of online play including providingmore than two dozen poker strategies and identifying online 'tells.' In a dozen concise but well-illustrated chapters he discusses the impact of televised poker and how online poker now ushers in a new era. One chapter offers a list of places to play with information on where you may learn to play or discuss the game and the benefits of online learning. Brunson discusses how to download software, fund your account, and how to get a taste by playing small money before advancing to bigger.
Get it at Amazon!
Read a review of Online Poker

LONDON, England -- You don't have to wait outside of Buckingham Palace to spot royalty in London. UltimateBet's Phil Hellmuth, arguably one of the kings of the poker world, will make his grand 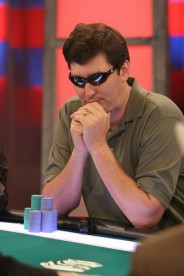 Phil Hellmuth  entrance to this year's World Series of Poker Europe on Saturday, September 26th, 2009 at The Casino of the Empire, located at 5-6 Leicester Square.

While it's not yet clear exactly what Phil Hellmuth will do, if this summer's WSOP entrance in Vegas is any indication, his London entrance will be one of the biggest highlights of the tournament.

Dressed as Julius Caesar, Hellmuth made his way to the Rio in Las Vegas for the WSOP protected by Roman guards and surrounded by muses throwing rose petals, all of who were outfitted only in body paint. The over-the-top entrance was in keeping with UltimateBet's 2009 WSOP theme. Celebrating its 10th anniversary dealing cards online, the online poker site invited poker players to join its empire in Vegas and compete for a $10 million Main Event bonus.

Phil Hellmuth doesn't reserve his grand entrances exclusively for Las Vegas. In 2008, UltimateBet held a Phil Hellmuth lookalike contest and invited London locals to show up to the WSOPE dressed as the 11-time WSOP bracelet winner.

In 2007, Phil Hellmuth grabbed the European media spotlight once again as he toured London's most famous sights aboard a Hellmuth-branded double-decker bus, accompanied by 12 models.

Poker fans in the UK are invited to join Phil Hellmuth for his grand entrance at 12:30pm on Saturday, September 26th, 2009 at the Empire Casino, 5-6 Leicester Square. Those who are unable to attend can read about Hellmuth's entrance on UltimateBet's blog, which can be found at UltimateBet.com.