Johnny Chan returns to the Asian Poker Tour in Macau

MACAU, CHINA -- After getting a taste of the Asian Poker Tour's event in Macau last year, Johnny Chan will be back this August 12th - 23rd for more.

The two-time WSOP champion is confirmed to 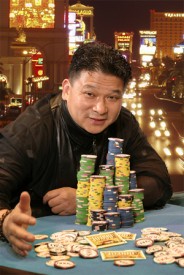 Johnny Chan  be a part of this year's Asian Poker Tour Macau event, which will be a twelve-day festival of poker this August. Chan will be on hand to play in this year's main event as well as to take part in the filming of "Poker King", an upcoming Chinese film about poker in Asia.

Chan, who was born in China, is one of the biggest names in poker history. Aside from winning back-to-back World Series of Poker championships in 1987 and 1988, he is also tied with Doyle Brunson for second all-time total bracelets with ten. He currently has over eight million dollars in winnings from live tournaments alone.

Joining Johnny Chan at the upcoming Asian Poker Tour Macau event will be some of the world's best poker players, including The Poker Pack. The Poker Pack is a team of specially selected players of Asian origin who are ambassadors for the Asian Poker Tour. The group is composed of JC Tran, Nam Le, Quinn Do, David "Chino" Rheem, Steve Sung, and Kwang Soo Lee. Together, the six have over $24 million in live tournament winnings.

For more information, log on to the Asian Poker Tour's web site at www.asianpt.com