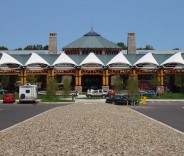 Lucas H., of White Pigeon, Mich., was dealt a full house - aces full of kings while playing Texas Hold'em in Four Winds Casino Resort's World Poker Tour® Poker Room on Saturday, January 24. Lucas thought he had a winning hand, but lost to a royal flush, which triggered Four Winds' Bad Beat Jackpot worth $304,742. Lucas won half the jackpot, valued at $152,362, while the remaining prize money was split between the other seven players at the table. A Bad Beat Jackpot is paid when a sufficiently strong hand is played, but loses to an even stronger hand held by another player.

"We want to congratulate Lucas and the other seven players who split our Bad Beat Jackpot," said Matt Harkness, general manager, Four Winds Casino Resort. "With the Bad Beat Jackpot, the diamond promotion and the members-only W Club jackpots worth up to $100,000, it's a very exciting time at Four Winds Casino Resort. There are so many opportunities to win."