Slot machine expansion a win for Ohio and Illinois

LAS VEGAS, Nevada –- The slot machine industry is celebrating some good news coming from two of the most unlikely places, Ohio and Illinois. 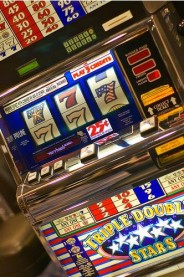 in the two states approved legislation that will add an estimated 40,000 to 75,000 new slot machines in the combined markets. Analysts said the events may trigger slot machine expansion in other states.

"These numbers may not be significant in the context of 930,000 machines in North America but they are very meaningful when compared to the only 25,000 replacement machines we expect this year," Goldman Sachs gaming analyst Stephen Kent said.

In Illinois, Gov. Pat Quinn approved a public works plan that will allow bars and taverns throughout the state to add video poker and video blackjack machines. Each location would be allowed three machines and analysts believe anywhere from 25,000 to 50,000 games could be added by next year.

In Ohio, Gov. Ted Strickland signed an agreement allowing the state's seven racetracks to each add up to 2,500 video lottery terminals for a total of 17,500 machines. Analysts suspect the games could be in place by next summer.

The legislation was cause for celebration within the slot machine industry. Equipment makers have been lobbying for gaming expansion in both states over the past few years.

"I would say it was a pleasant surprise because we did not fully anticipate the way this came down," said Chuck Brooke, senior vice president of government affairs for International Game Technology.

The unanswered question is how other states will respond.

Kent thought Kentucky, which did not approve a push for racetrack slot machines earlier this year, could revisit the issue in the fall. Kentucky tracks will have to compete with Indiana and Ohio tracks, which will have slot machines.

"These are two important events that could lead to a domino effect of even more new slots down the road," Kent said.

Slot machine makers' stocks have already experienced a bump because of the news. Share prices for IGT, Bally Technologies and WMS Industries rose the day after Quinn signed the Illinois legislation.

Meanwhile, analysts thought casino operators in neighboring states would be forced to update their slot machine floors to deal with the expansion.

The news was good and bad for Penn National Gaming.

The company owns Raceway Park in Toledo, which can add slot machines. Expanded gambling in Ohio, however, could hurt Penn's Lawrenceburg, Ind., riverboat casino, which draws a substantial customer base from nearby Cincinnati.