LONDON, England -- Doyle 'Texas Dolly' Brunson has confirmed the he will be attending the Budapest Affiliate Conference from the 11th to the 13th of September. The legendary Patriarch of Modern Poker 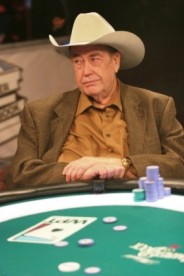 Doyle Brunson  is coming to the event under the invitation of the event organisers, iGaming Business, and will be holding a special Q&A session for all attending delegates.

"It was incredible to hear that the legend himself was interested in coming to another one of our events" Alex Pratt, iGaming Publisher commented, referring to one of their previous events held in Barcelona 2007 when Doyle was keynote speaker. "Doyle was a hit then, and is guaranteed to create an even bigger impact now, as delegates will be able to meet the man himself and experience a rare private Q&A session with him. Brunson's experience in Poker and the evolution of the industry over the last 50 years cannot be matched. This is an once-in-a-lifetime chance to meet one of the men who started it all."

Brunson is considered a walking phenomenon in the industry and an icon in the world of poker. He was present at the first 'World Series of Poker' in the 1970s, then a modest affair which has now evolved into a worldwide media spectacle. From these humble beginnings, he has since dominated the tournament, from the moment he won his second consecutive bracelet in 1976, to ten years later when he surpassed expectations and won his tenth. Even now, having reached his 75th birthday he refuses to retire and continues to play with the elite!

Recently 'The Texas Dolly' has increased his stake in the online gaming world with the re-launch and redesign of his website DoylesRoom.com – a site dedicated to his game and brand. Brunson is taking a keen interest in the Budapest Affiliate Conference for the events ability to provide DoylesRoom.com with one of the largest Affiliate database in the market and a consistent high turnout record at their conferences.

"My personal goal is to establish the new DoylesRoom and its affiliate program; to ensure that we build bridges and trust as I'm certain that DoylesRoom is set to be the fastest growing poker room online". The legend added "I have the privilege of being able to talk poker in person with players all over the world, but it's not often that I get to chat to affiliates. I'm really looking forward to getting down to business at the Budapest Affiliate Conference with some of the key people who drive this industry".

The question remains – why Budapest? Other than the event coinciding with the launch of the new site, the industry buzz claims that he is planning on holding an exclusive poker night at his Budapest Poker club www.Doyle.hu during his time in the city. The Poker Star however remains elusive simply claiming "It won't all be about business. I'm also sticking around to sign autographs and take pictures with those who love this game as much as I do".

Brunson has always played with the best and this rare opportunity to interact and do business with the acclaimed icon is only available to delegates, with the added advantage to Affiliates as the event is free to attend. To register simply go to www.budapestaffiliateconference.com. As he often says; it's not always what you're dealt, but how you play your cards.