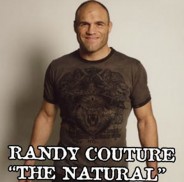 Randy "The Natural" Couture will be hosting the 2nd annual "Operation All In" poker tournament  Xtreme Couture G.I. Foundation at the Golden Nugget Las Vegas, Aug. 22 starting at 2 p.m.

This event, held in The Grand events center, is open to the public and will feature a celebrity charity poker tournament, live and silent auctions, autographs sessions, and an amazing chance to win big, while giving back to injured troops who have selflessly put their lives on the line in the protection of America's freedom.

"We're thrilled to welcome everyone back for our second annual charity event," said Couture. "It's sure to be an amazing time, while raising awareness and a lot of money for an unbelievable cause."

"Operation All In" will welcome professional celebrity poker players and stars from the MMA world and Hollywood to play alongside the public in its charity poker tournament, where the grand prize is a $10,000 seat in the Sports Legends Challenge poker tournament at Atlantis Paradise Island in the Bahamas, donated by SportsLegendsChallenge.com.

The Sports Legends Challenge is sports fans' ultimate fantasy featuring four days of casino gaming and golf cash prize tournaments with some of the biggest names in sports, including Troy Aikman, Sugar Ray Leonard, Richard Petty, Kareem Abdul-Jabbar, Joe Namath, Reggie Jackson and many others. To up the ante, the event will also feature 25 of the world's top poker pros such as Jamie Gold, Annie Duke, Johnny Chan and Mike Sexton, who will play with and coach event participants. The event will be held at the Atlantis Paradise Island Resort & Casino in the Bahamas Sept. 14-17. The sports legends, poker pros and participants will compete in a variety of events including No Limit Texas Hold 'em, blackjack, slots and golf tournaments to vie for up to $10 million in prize money.

Ultimate Fighting Champion Couture, a veteran himself of the Army's 101st Airborne Division, started the Xtreme Couture G.I. Foundation to raise money and awareness for troops wounded in action and their families. After visiting with amputees at Brooke Army Medical Center in San Antonio, Couture was brought to tears seeing the young men and women who had given their all for freedom, young heroes who now have to go through life's challenges with devastating physical and emotional injuries. To date, more than 24,000 U.S. troops have been wounded in the war against terrorism, which does not include the many more suffering the mental effects. The Xtreme Couture G.I. Foundation goal is to help these brave men and women fulfill any of their unmet needs as they return back to civilian life.

"Having spent time in a uniform it became a personal goal of mine to find a way to give back to the brave men and women of our Armed Forces for the sacrifices they make defending our freedoms. The Xtreme Couture G.I. Foundation was born out of that desire. We hope you'll come join us for a great night and rub elbows with some of the best fighters and poker players on the planet all in the name of our troops!"

This Second Annual "Operation All In" was organized to do just that.

In addition to the tournament, this event will also feature a silent auction for the duration of the poker tournament, with an amazing array of MMA memorabilia up for grabs, all benefiting the worthwhile charity. A live auction will also be held during the evening with prizes including some donated personally by Couture, such as dinner with the fighter and a one-hour personal MMA lesson. In addition to Couture, other MMA fighters will be on hand throughout the evening for photos and autographs with tournament players and fans.

Following the tournament and auctions, an after party will be held at the Golden Nugget's Gold Diggers nightclub at 4 p.m. All participants in the tournament or auctions are invited to the after party, as well.