Thursday, June 15, 2006
LAS VEGAS -- When Donn Arden's Jubilee! made it's spectacular debut in 1981, not even the savviest of odds-makers could have envisioned the incredible success of the mega show created by the legendary 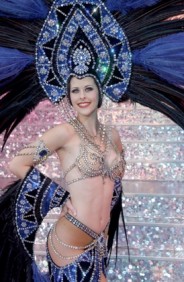 A Jubilee Showgirl  late producer.
Now, thousands of showgirls and millions of rhinestones later, Donn Arden's Jubilee! is celebrating twenty-five years of packed houses at Bally's Las Vegas with a nationwide search for new talent to take this extravagant stage production into its second quarter century.
Producers for the show will be in New York City on June 22nd auditioning performers at the Ripley Grier Studio at 520 Eighth Avenue (between 36th and 37th). Call for dancers is 11:00 a.m. - 3:00 p.m. and potential showgirls must excel in jazz, ballet and tap. Ladies must be at least 5'8".
Jubilee! burst onto the Las Vegas scene with an initial production budget of $10 million, more than 1000 dazzling costumes and elaborate feather headdresses, 53 songs and set pieces weighing up to four tons. Today, each performance features 100 dancers plus singers and specialty acts on a gigantic stage half the size of a football field and 15 stories tall.
The show has won virtually every award for excellence in Las Vegas including Best Show, Best Showgirls, Visitors' Choice and Best of Las Vegas six times.
More to the point, Jubilee! continues to pack its 1000-plus seat theater twice nightly six days a week with audiences who can't get enough of the quintessential Vegas extravaganza.
Marilyn Winn, President of Bally's Las Vegas said, "In celebration of our silver anniversary we will be auditioning dancers in America's most exciting cities, including Miami, Chicago, San Francisco, Los Angeles and, of course, New York - hoping to discover a whole new generation of amazing showgirls to take the show into its second twenty-five years!"
Bally's Las Vegas
3645 Las Vegas Blvd South
Las Vegas, NV , NV 89109-4307
Phone: (702) 967-4405
Toll Free Phone: (888) 742-9248
Website: www.caesars.com/Ballys/LasVegas
[ more gambling news ]
© 2006-2016 ReadyBetGo!